Every two years, the Israeli Air Force hosts a significant military exercise known as ‘Blue Flag’. The first “Blue Flag” took place in 2013 and was designed to be the largest international exercise of its kind by Israeli standards. Since then, the publicity it has gained is largely due to its international character. This year the United States, Greece, Germany and Italy — each of whom had participated in previous Blue Flag drills — sent air crews to Israel ahead of the exercise. Other countries were also planning to send smaller teams to observe the drill, but did not participate, according to IDF spokesmen.

As in earlier editions, Blue Flag 2019 took place at Uvda Air Force Base, which is located in the Negev desert, about 60 kilometers north of the city of Eilat, down on the Red Sea.
As mr. Tal Herman, Head of Blue Flag management team and retired IAF, explained at the press conference on November 11th, “Uvda is the place to be because it offers the proximity of extended aerial playground and ranges”. In order to fly unrestrictedly, all airspace ranging from Tel Aviv to Uvda was off limits for all other civil and military aerial traffic during the exercise.
Moreover, Uvda has the needed GCU (Ground Control Units) for briefing and debriefing and is home to the 115th “Flying Dragon” squadron, that specializes in enemy tactics and being the Red Air component of the exercise, an enemy in Israeli fighter jet exercises, as well as ground operatives who will control a range of enemy weaponry such as missile launchers. 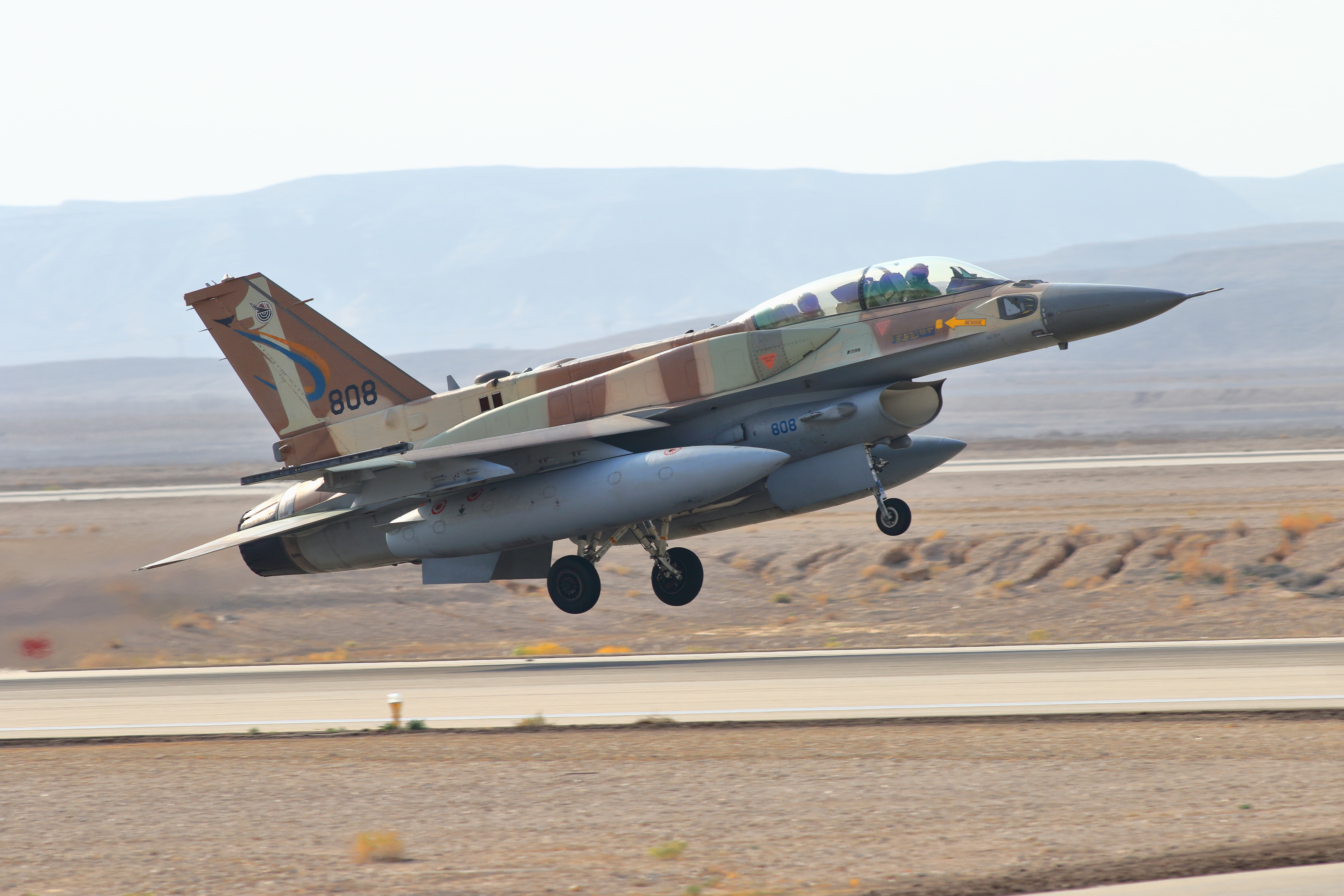 Red vs. Blue
The storyline guiding the Blue Flag exercise is based on two fictional neighboring countries, one blue and the other red (Israeli jets playing the enemy). The scenarios included large aircraft formations, including fighter jets, RPAVs (Remotely Piloted Aerial Vehicles), transport aircraft and helicopters.
The blue force’s mission during the first week of the exercise was protecting Israel’s skies against various enemy threats. During the second week, the blue forces took off to attack targets in red force territory. The blue forces had to utilize everything at their platforms’ disposal in order to perform their mission successfully. The F-35 brings a significant advantage to the theatre, which allows the other aircraft to carry on with their missions while handling oncoming threats.
The red force was made up of the force’s aggressor squadron – the 115th (“Flying Dragon”) Squadron – and the Air Defense Array’s “Yahalom” (Patriot) batteries, which acted as advanced SAM (Surface-to-Air Missile) systems.

Goals of Blue Flag 2019
The Blue Flag exercise is of high strategic importance and has a significant influence on the international strategic plans of the State of Israel. In a statement, the IAF said that the goal of the exercise is to simulate extreme war and coalition flight scenarios in the most realistic manner. The subjects this year were closer to real combat and quite complicated, including air-to-air battle, air-to-ground battle and ground-air missile threat response. The Israeli Air Force and its foreign counterparts flew tens of times to simulate ground-air battle scenarios and collect information for joint response to ground-to-air missiles and joint operations on enemy territory. Israel’s military exercises in recent years have become increasingly realistic.
Another significant goal of this years Blue Flag was combining fourth- and fifth-generation planes and to train and understand the fifth generation F-35 stealth fighter. This new type of aircraft participated for the first time. Both Israel and Italy send their new F-35s to Uvda.
Mr. Tal Herman explained that this made Blue Flag 2019 “advanced, because this is the first time that fifth-generation aircraft – the Israeli F-35 and the Italian F-35 – are taking part. We focused on integrating these planes and linking them up with fourth-generation planes, like F-15s and F-16s, and the German and Italian Eurofighters”. The introduction of the F-35 to the exercise helped making that task easier since the international aircraft all have NATO’s Link 16 communications system installed onboard – a system the IAF did not have previously, until the arrival of the F-35, which comes with the system installed. This means that for the first time, Israeli jets connected to the NATO Link 16 network. 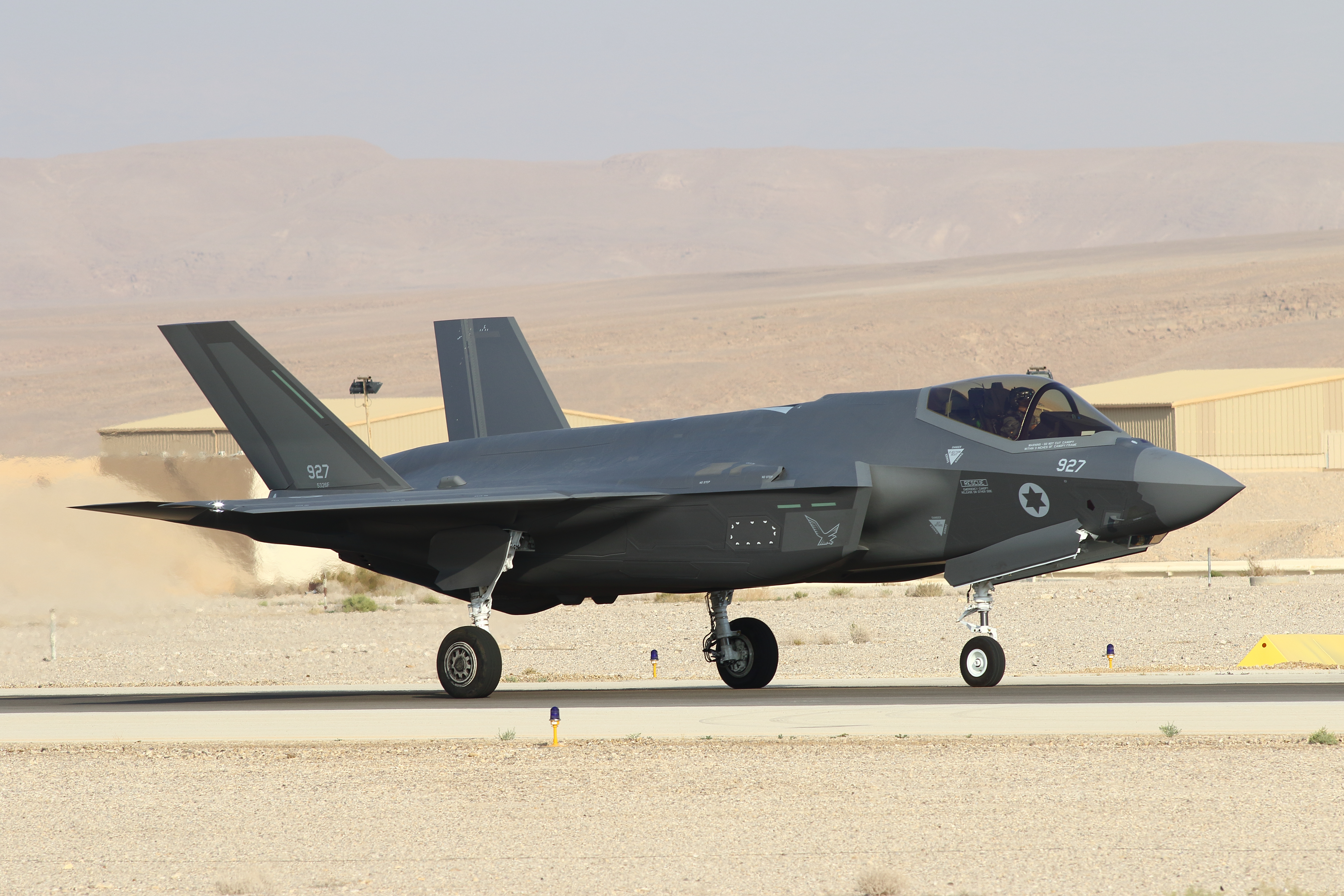 F-35I ‘Adir’ of 140th (‘Golden Eagle’) squadron, based at Nevatim air base. It was the first time the F-35 participated in the exercise.

Israel has the F-35, called “Adir” (“Mighty One”) in service since 2016 and used it in combat in 2018. Currently the IAF has 14 F-35 Adir aircraft and is expected to receive from the US a total of 50 planes to make two full squadrons by 2024. The F-35 is of great importance for the Israeli Air Force and national defense. It has been called stealth warplane because of its good stealth performance against regular radars and the ability to fly at hypervelocity while carrying ammunition. After it was commissioned to real combat by Israel in 2018, the warplane has flown to Syria and Lebanon as well as Iranian hinterland without triggering early warning of the local air defense system. Although some military experts claimed earlier that it would take some time for F-35 to merge with Israel’s military communication and weapon system, it seems that Israel is already capable of integrating the warplane with its existing combat system and turning its performance advantages into combat force. A direct purpose of the Blue Flag exercise was reinforcing that capability and cooperating with the US and other countries to regularize the combined use of F-35 in real combat. 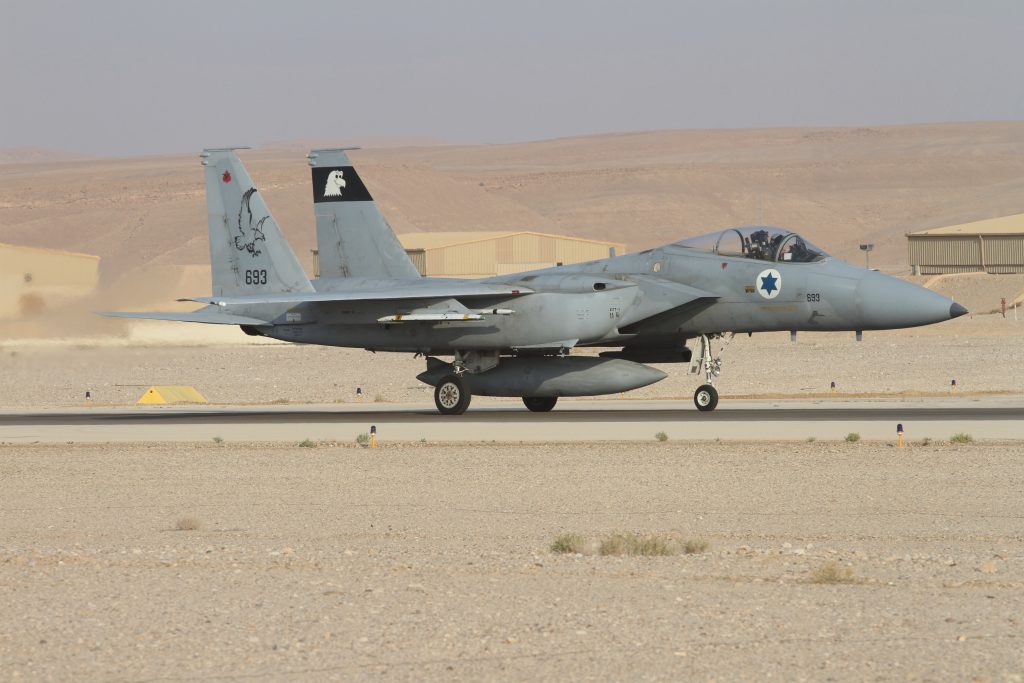 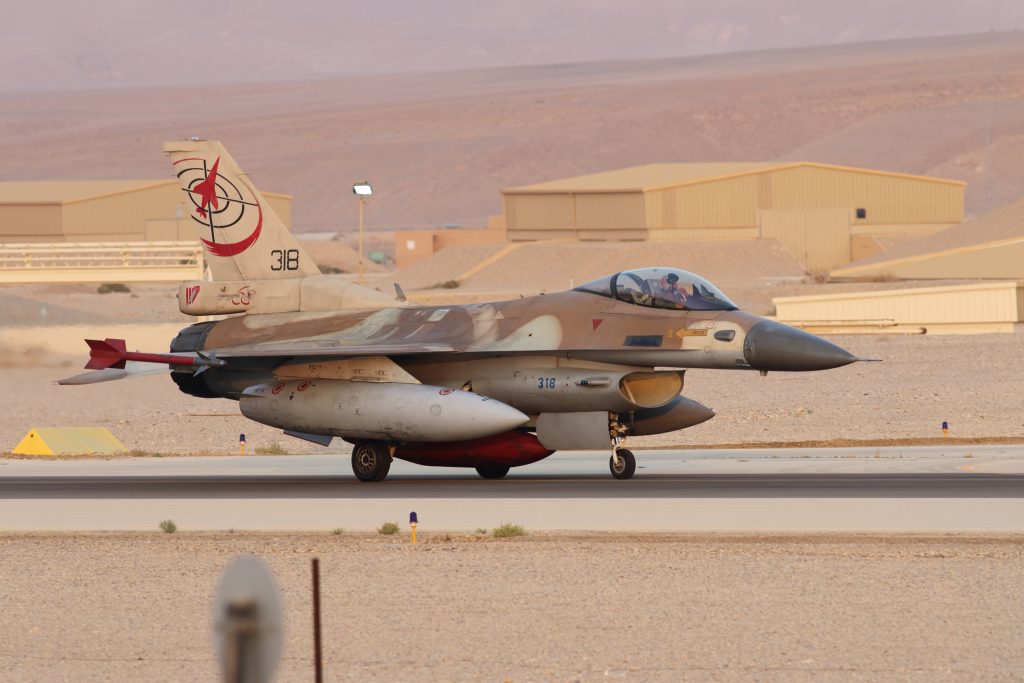 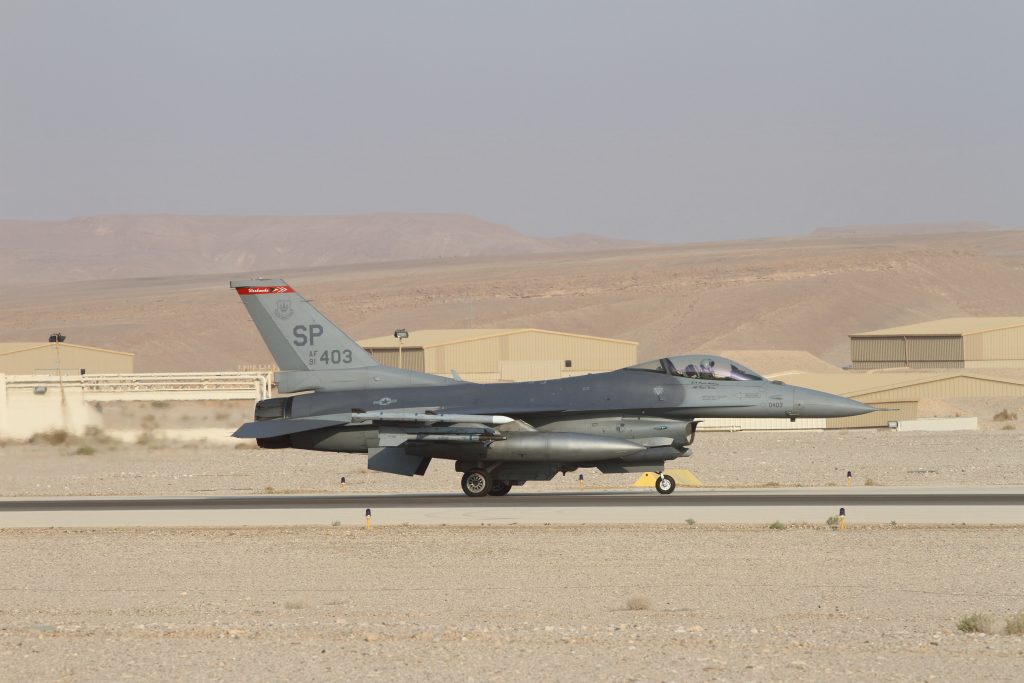 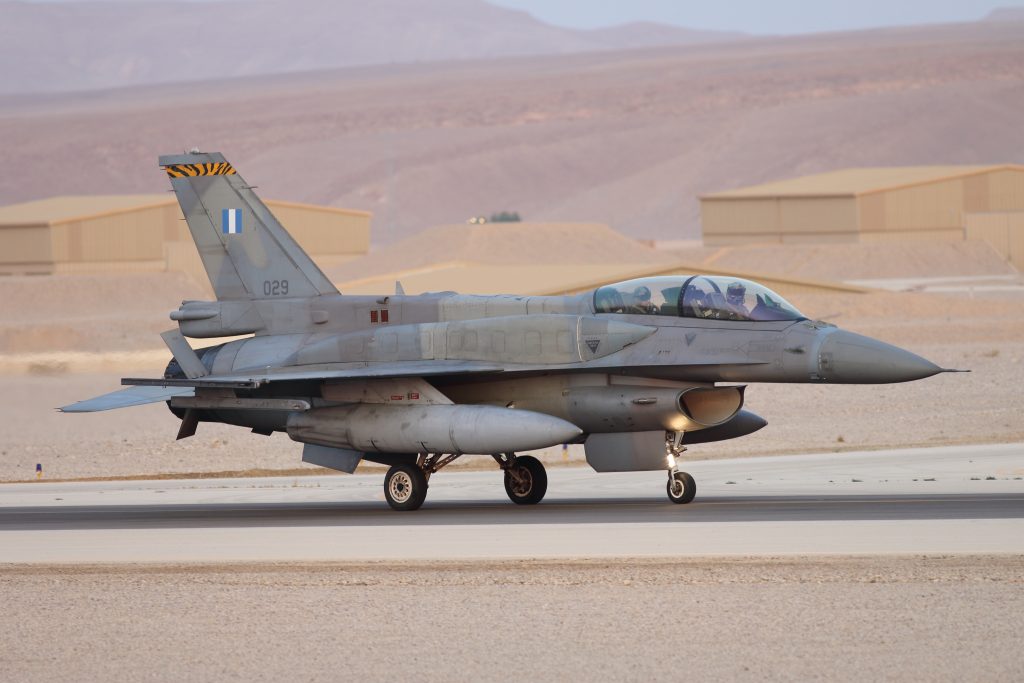 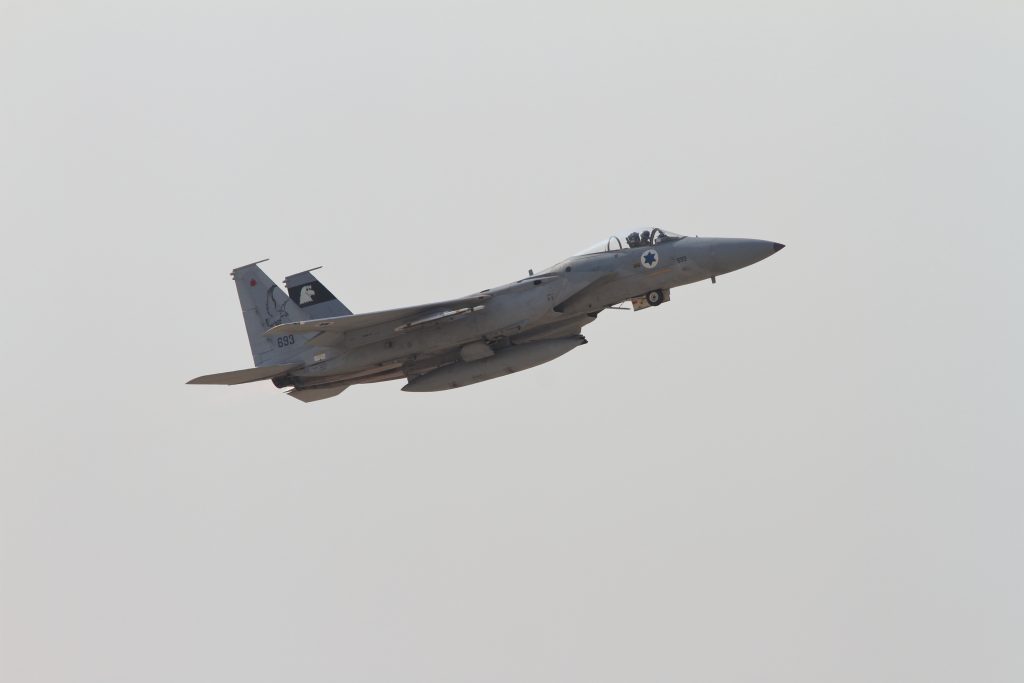 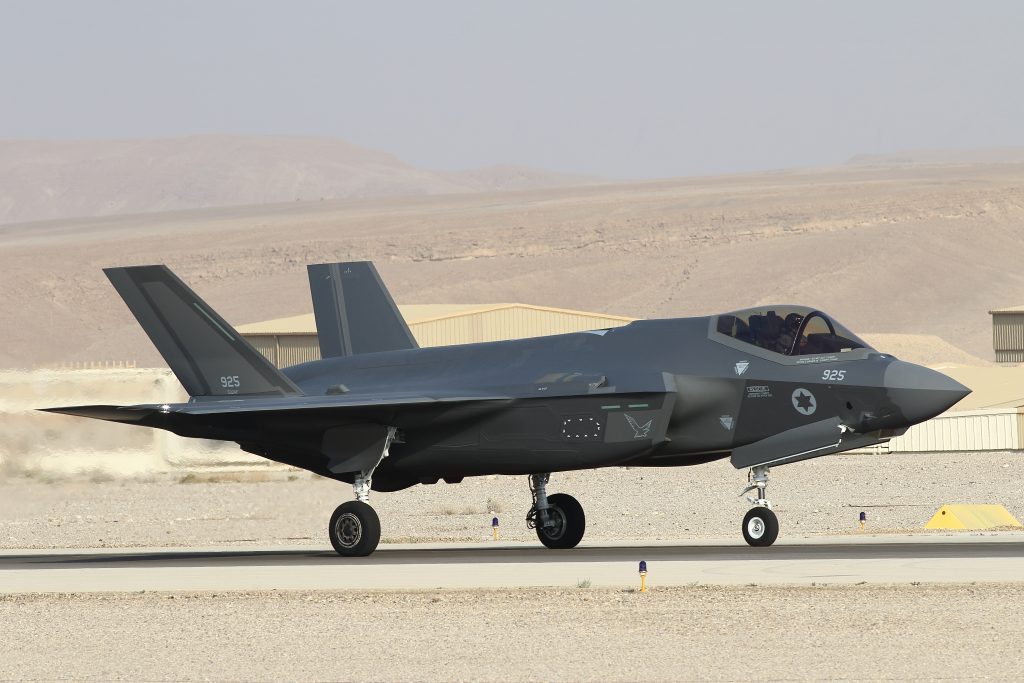 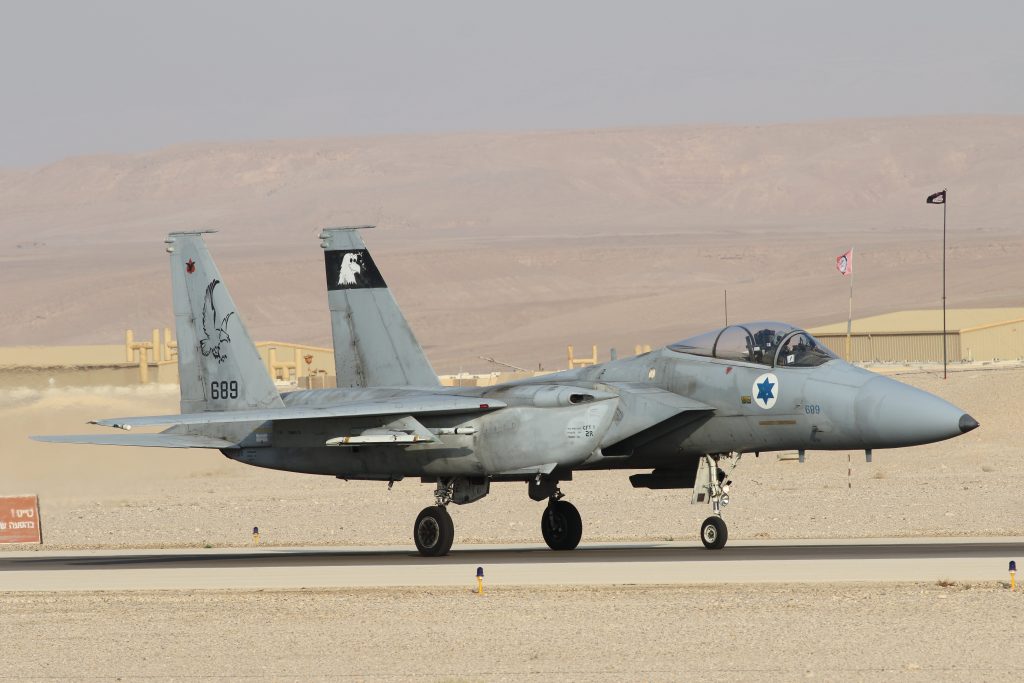 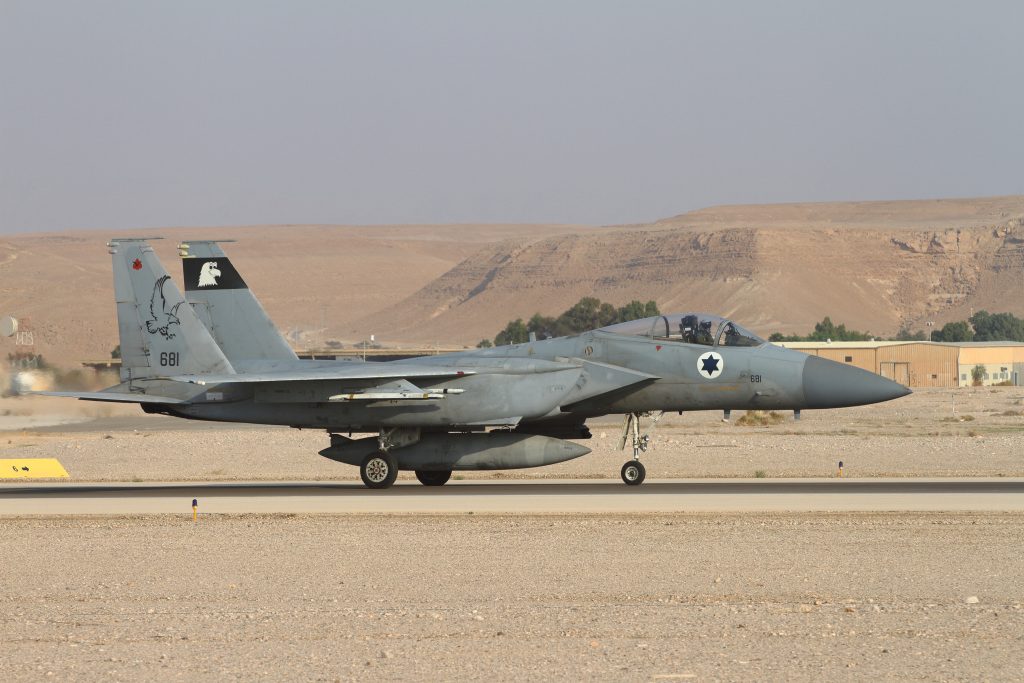 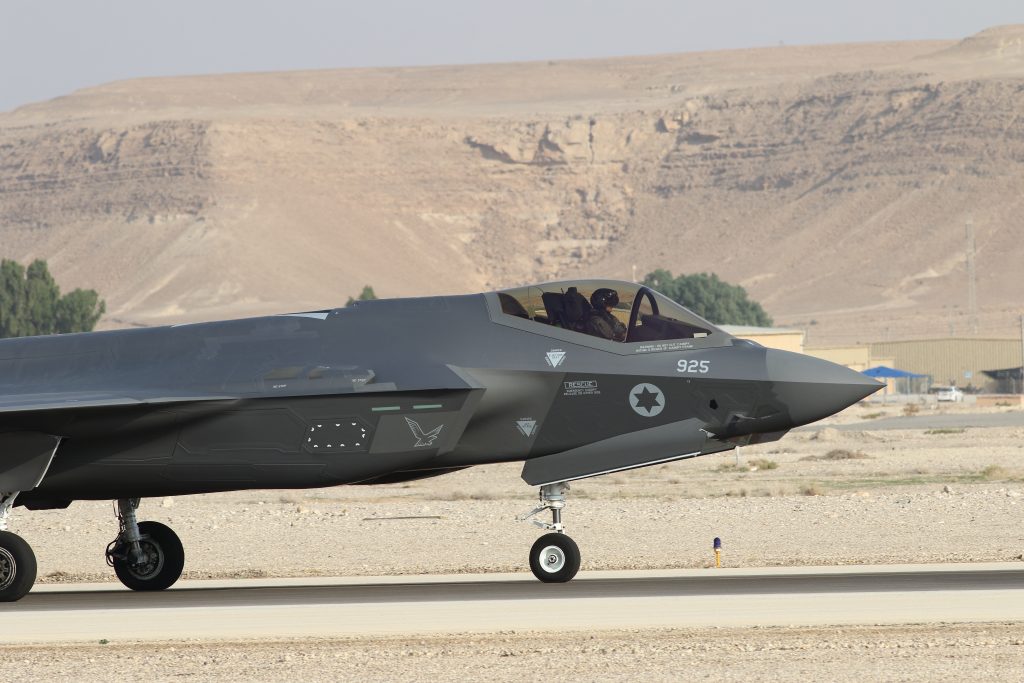 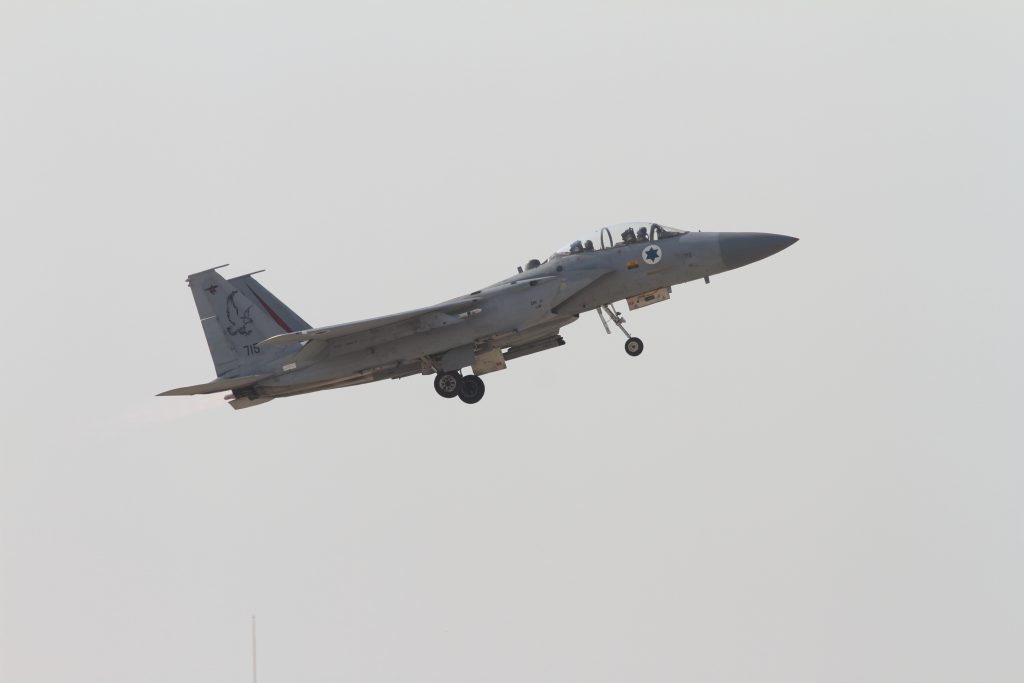 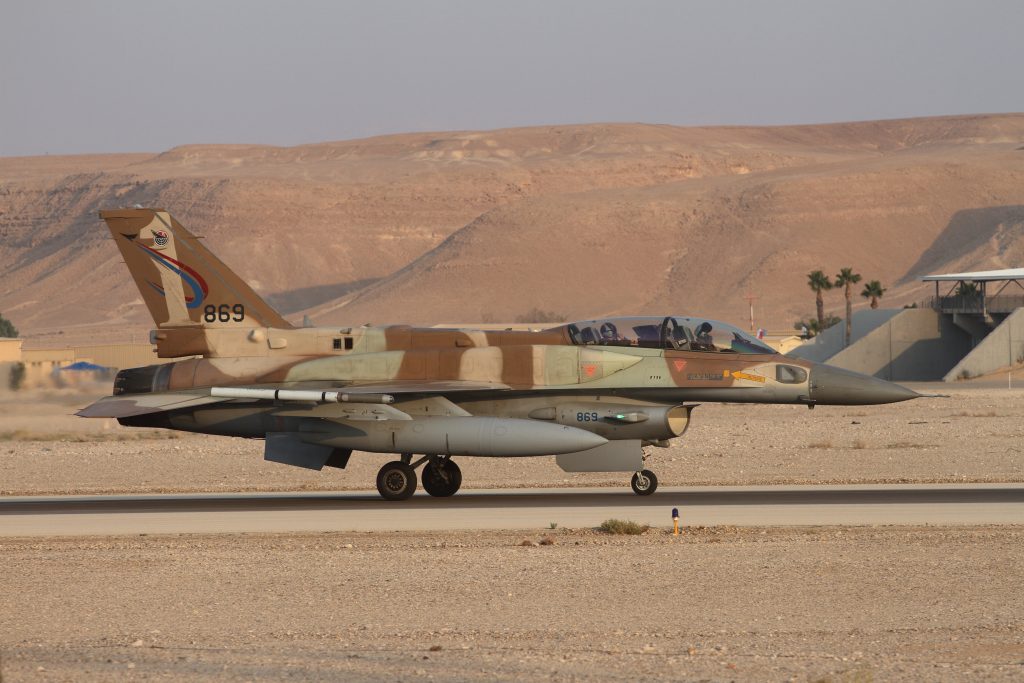 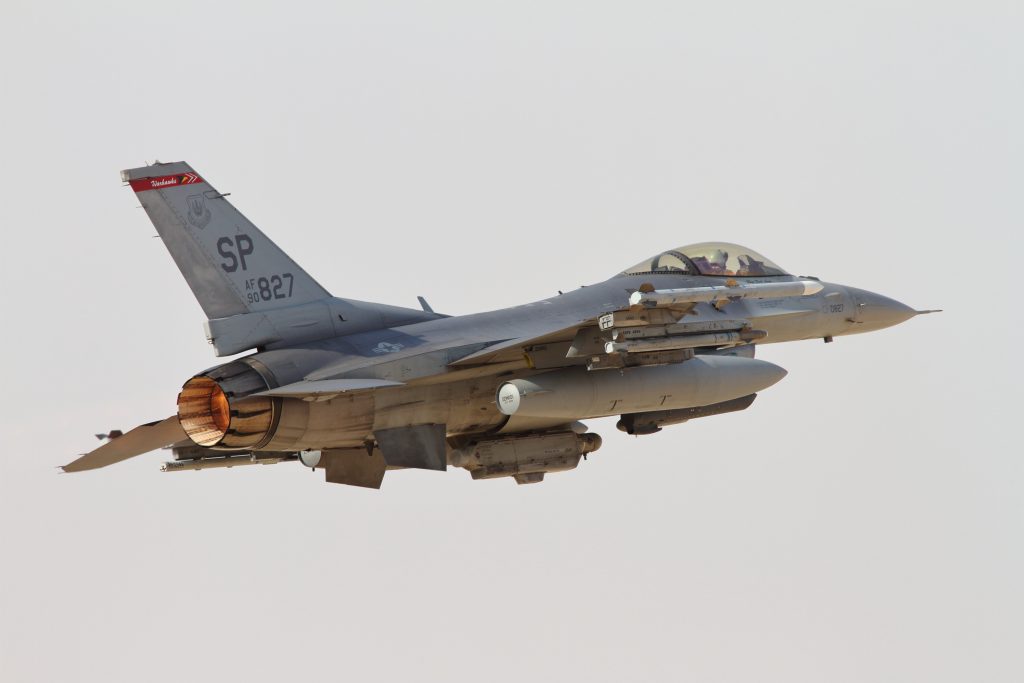 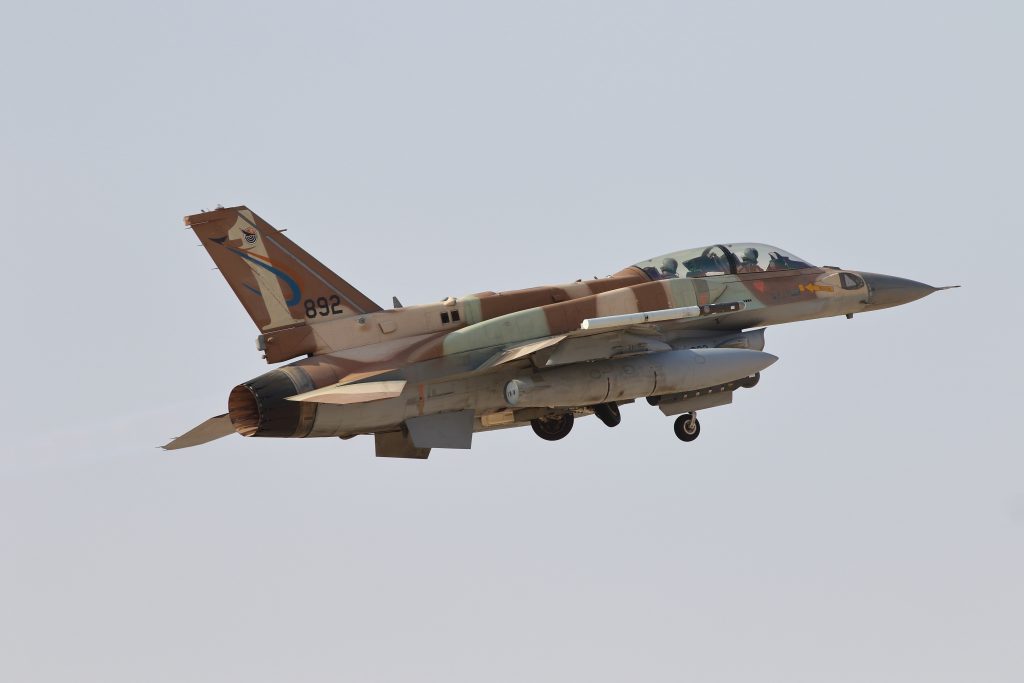 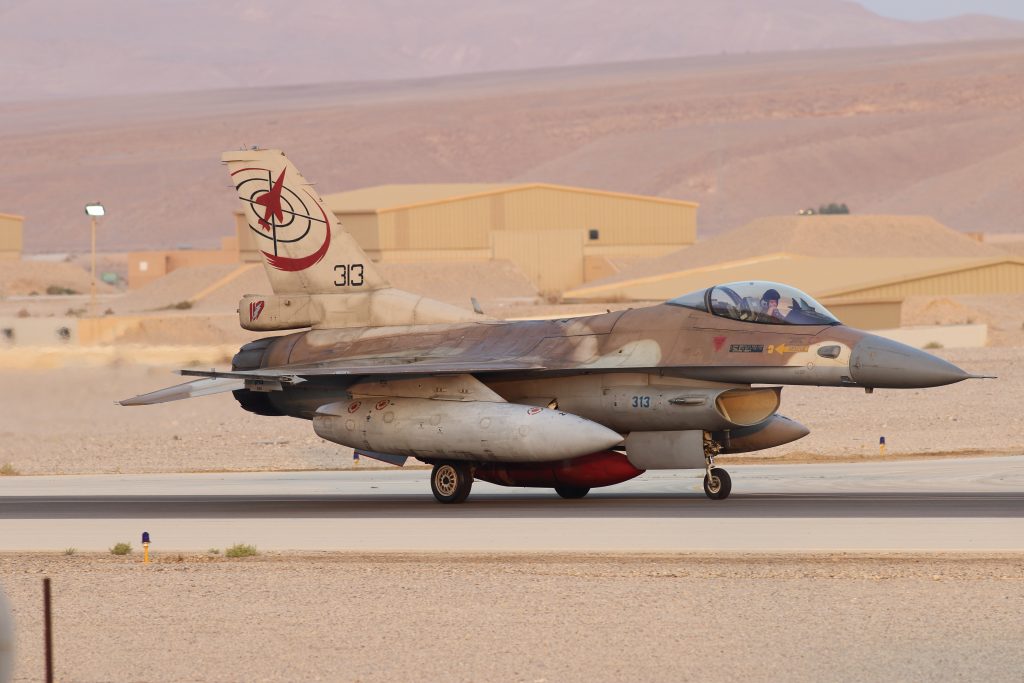 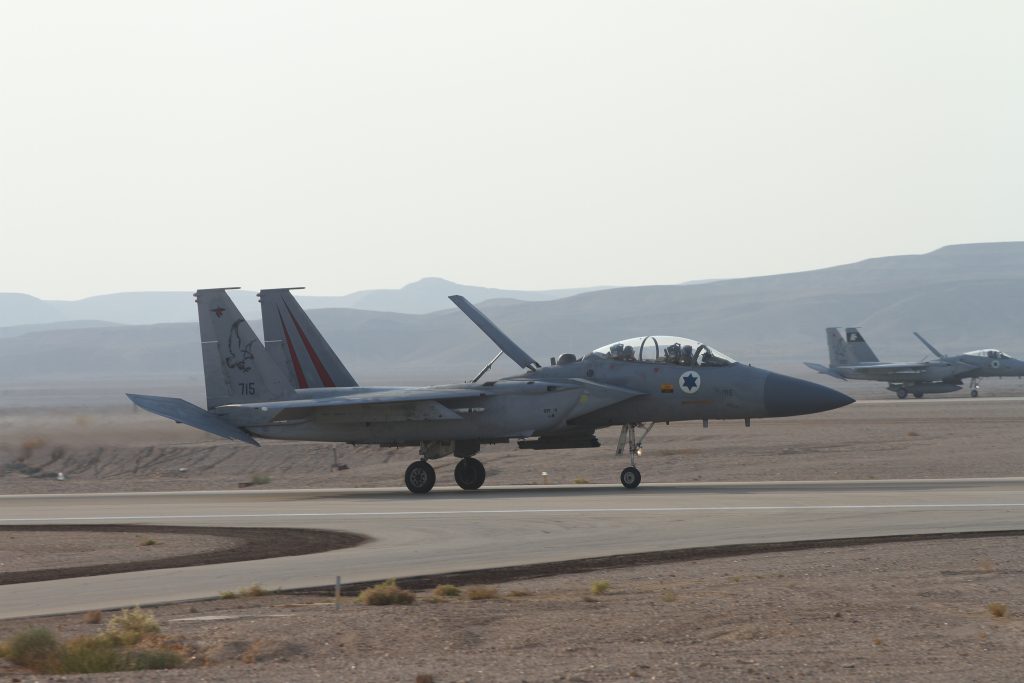 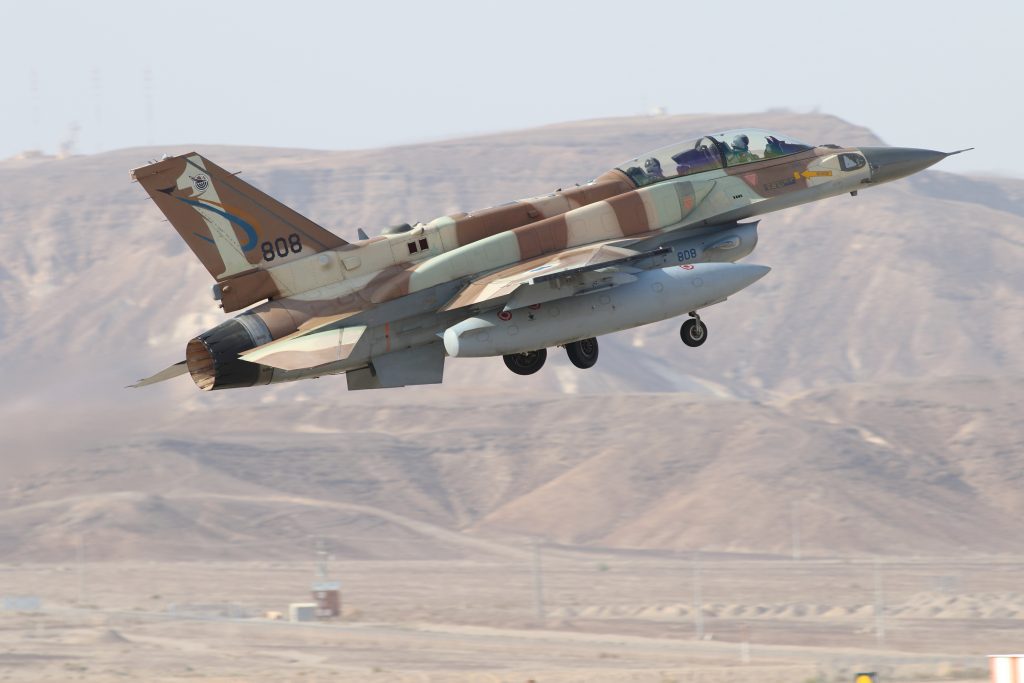 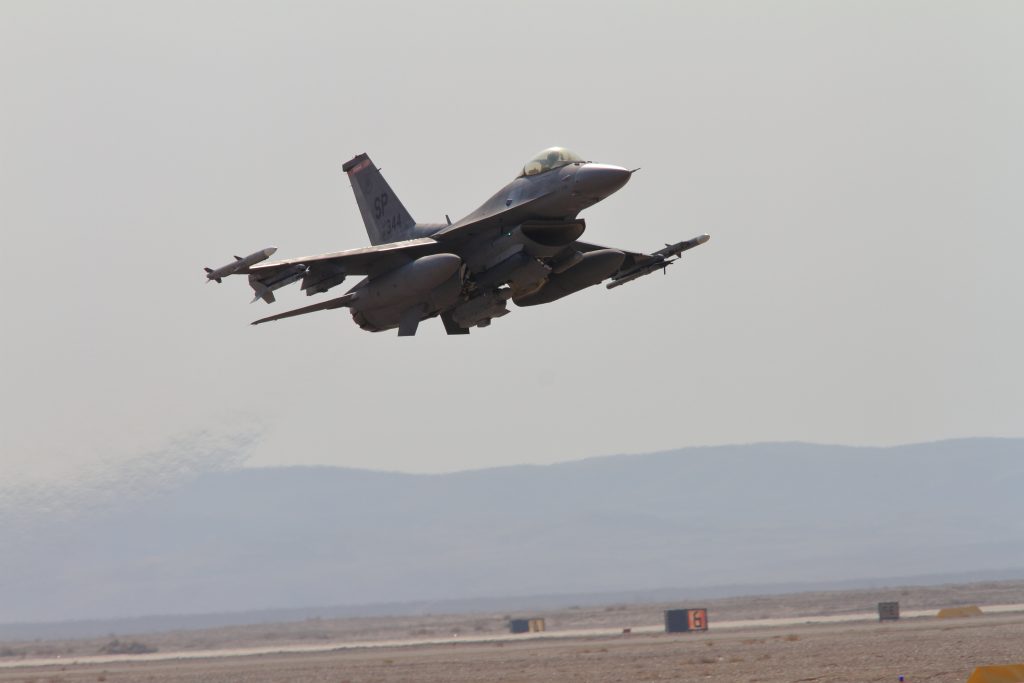 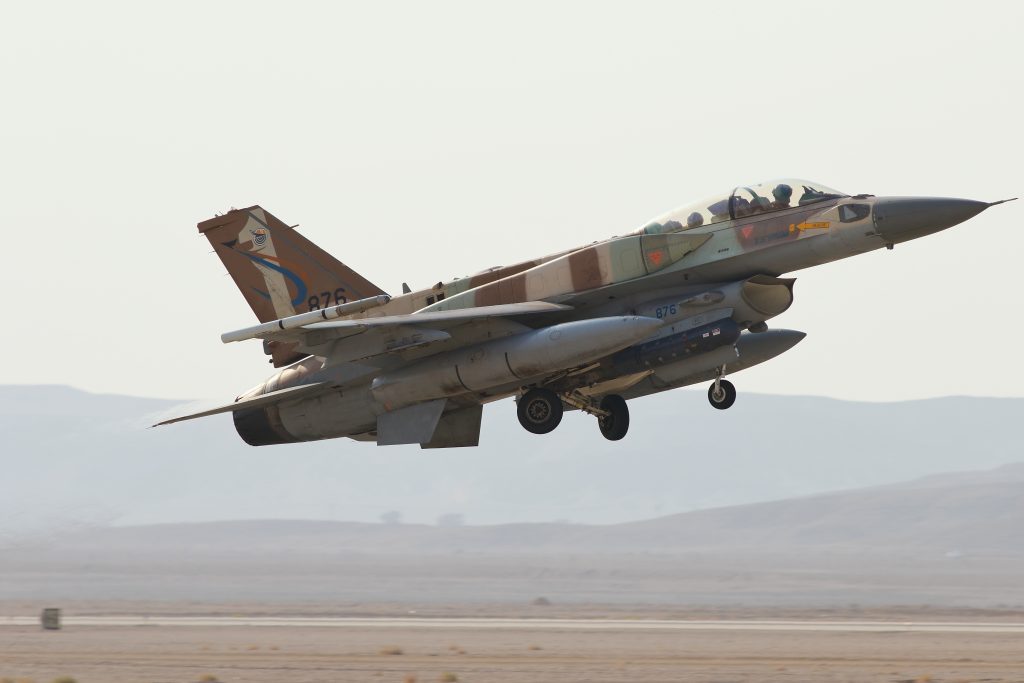 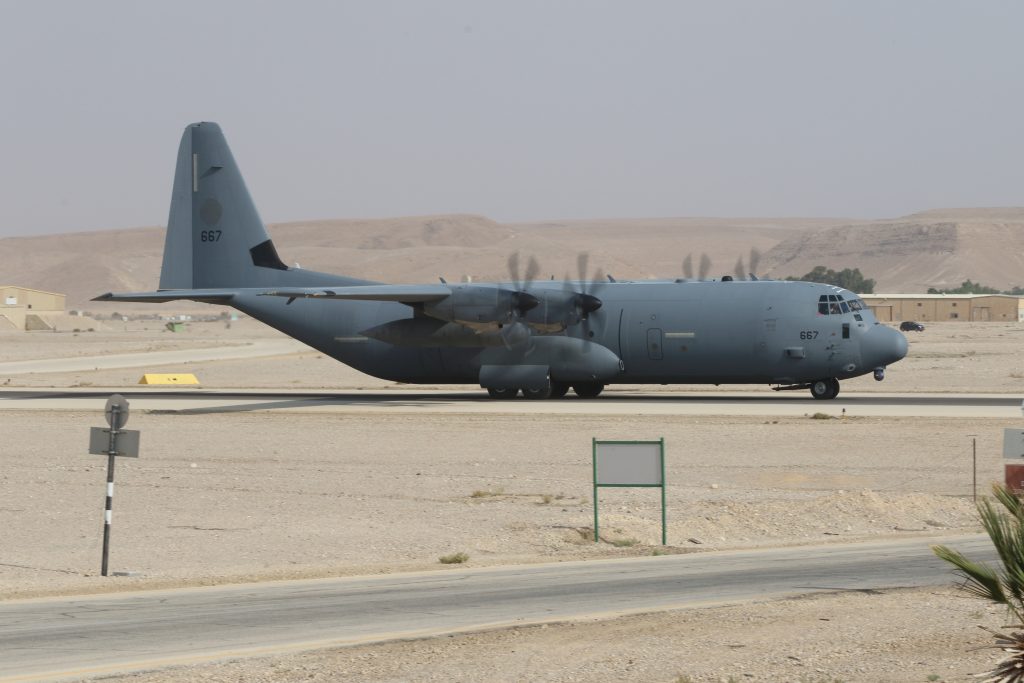 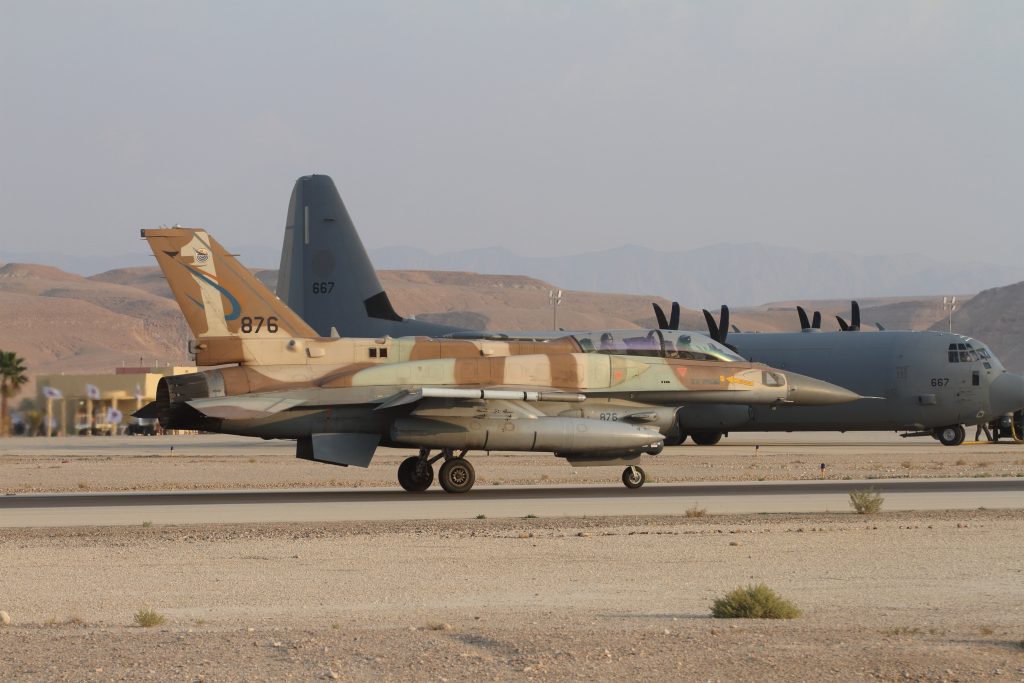 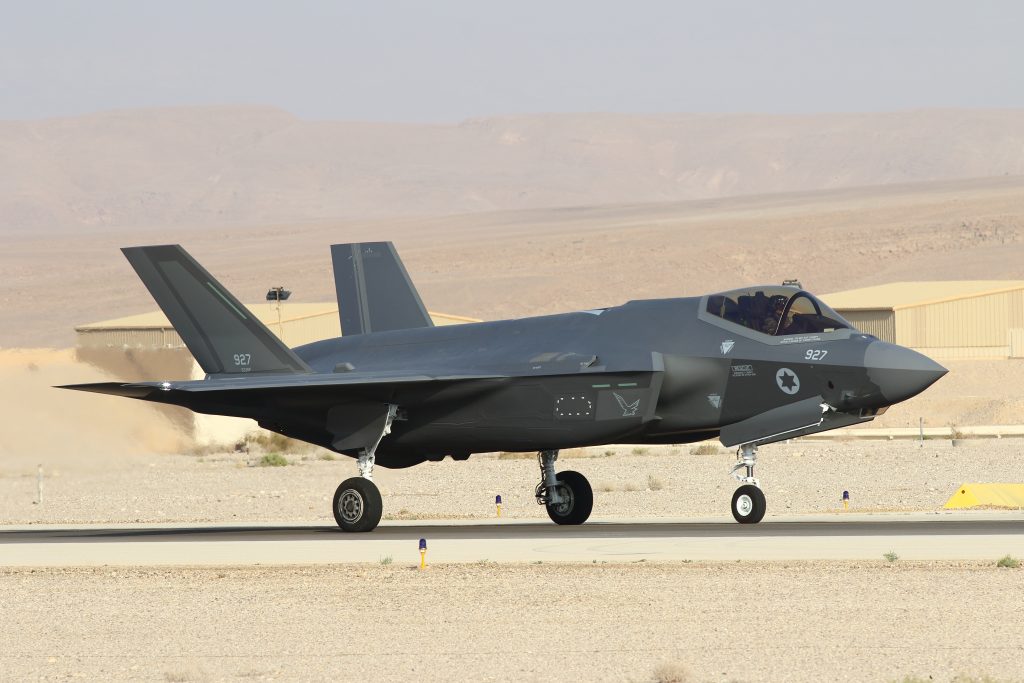 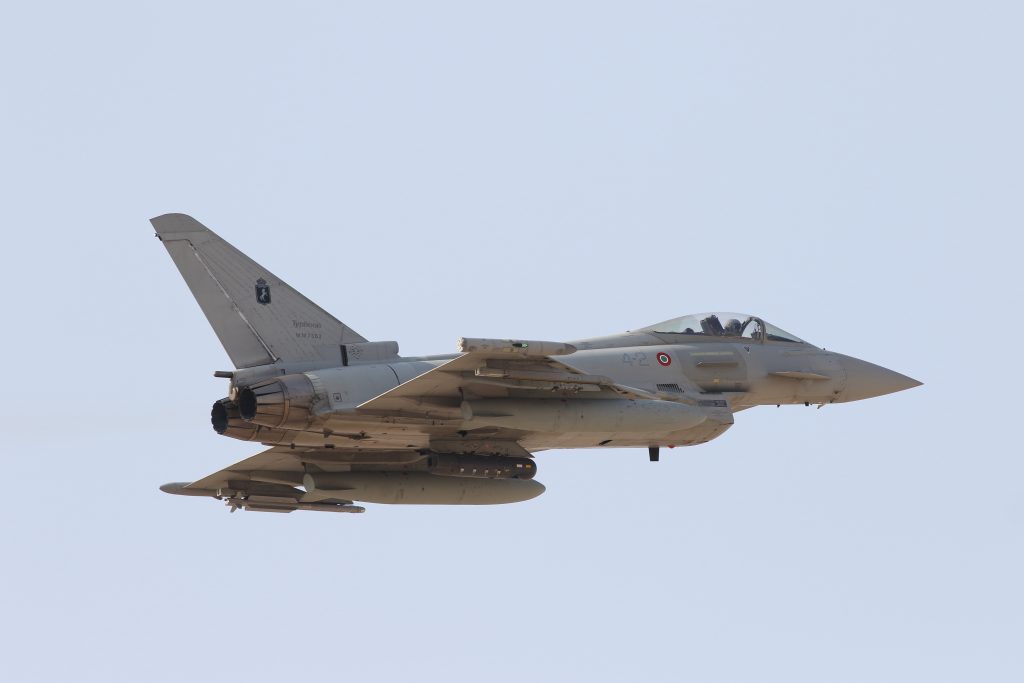 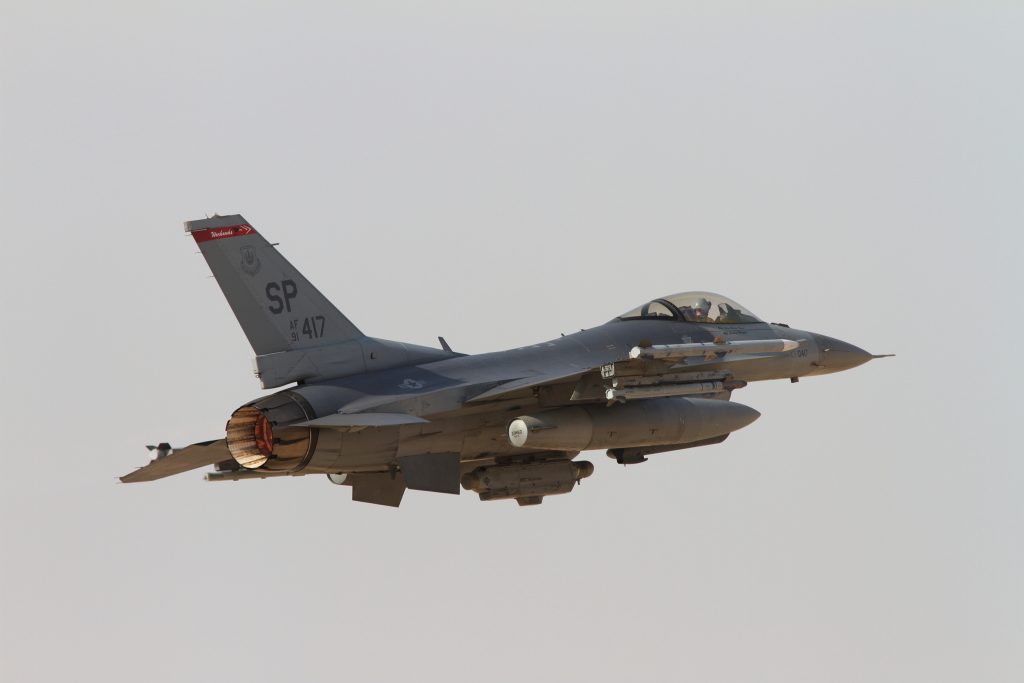 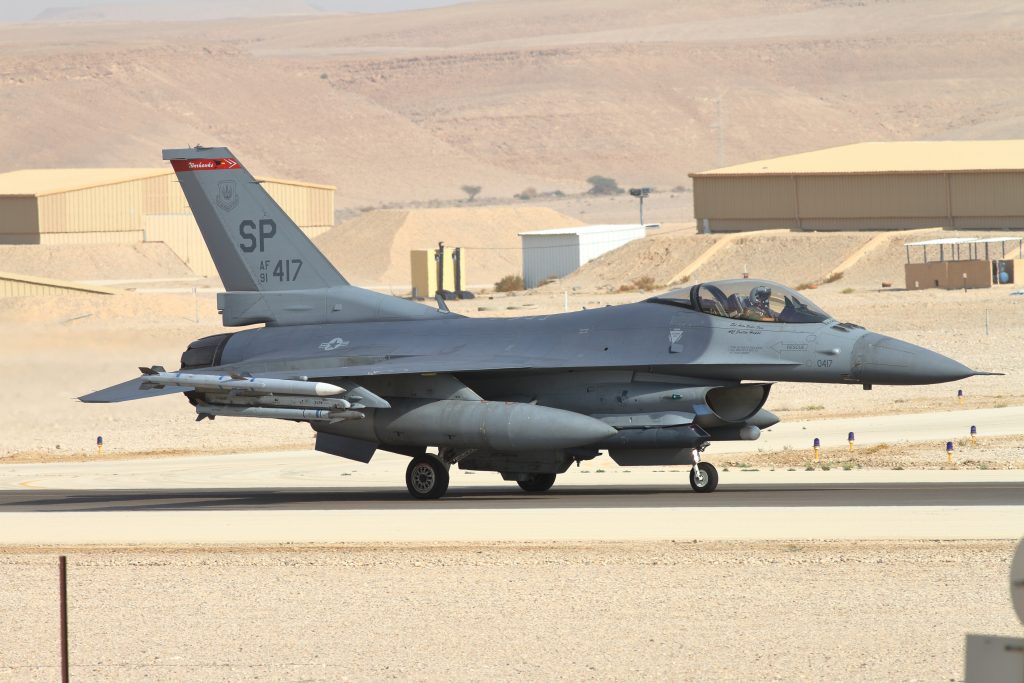 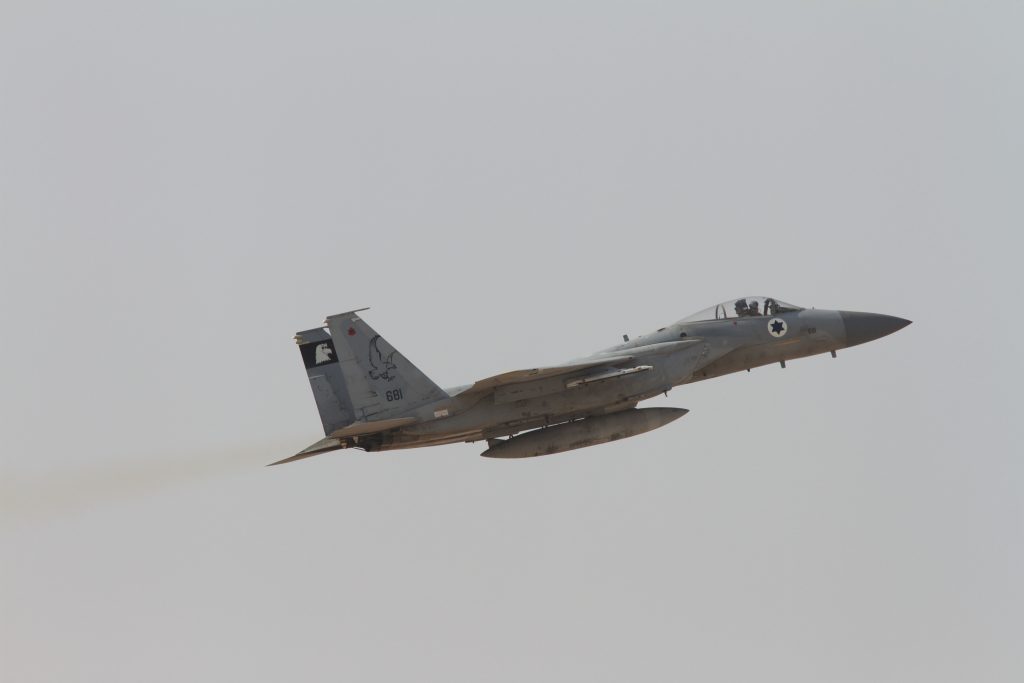 A challenging aspect of sending F-35s to Uvda, Tal Herman explained, was that Uvda has several HAS (Hardened Aircraft Shelters) in which aircraft are parked. As the F-35 jet is considerably tall, it does not fit into a standard HAS. To house the Adirs from the 140th (“Golden Eagle”) squadron from Nevatim airbase at Uvda, some of the HAS’ concrete had to be sawn off in order to properly fit the F-35 in. This means that Uvda is now capable of housing the F-35. Not all IAF airbases are capable of doing so. 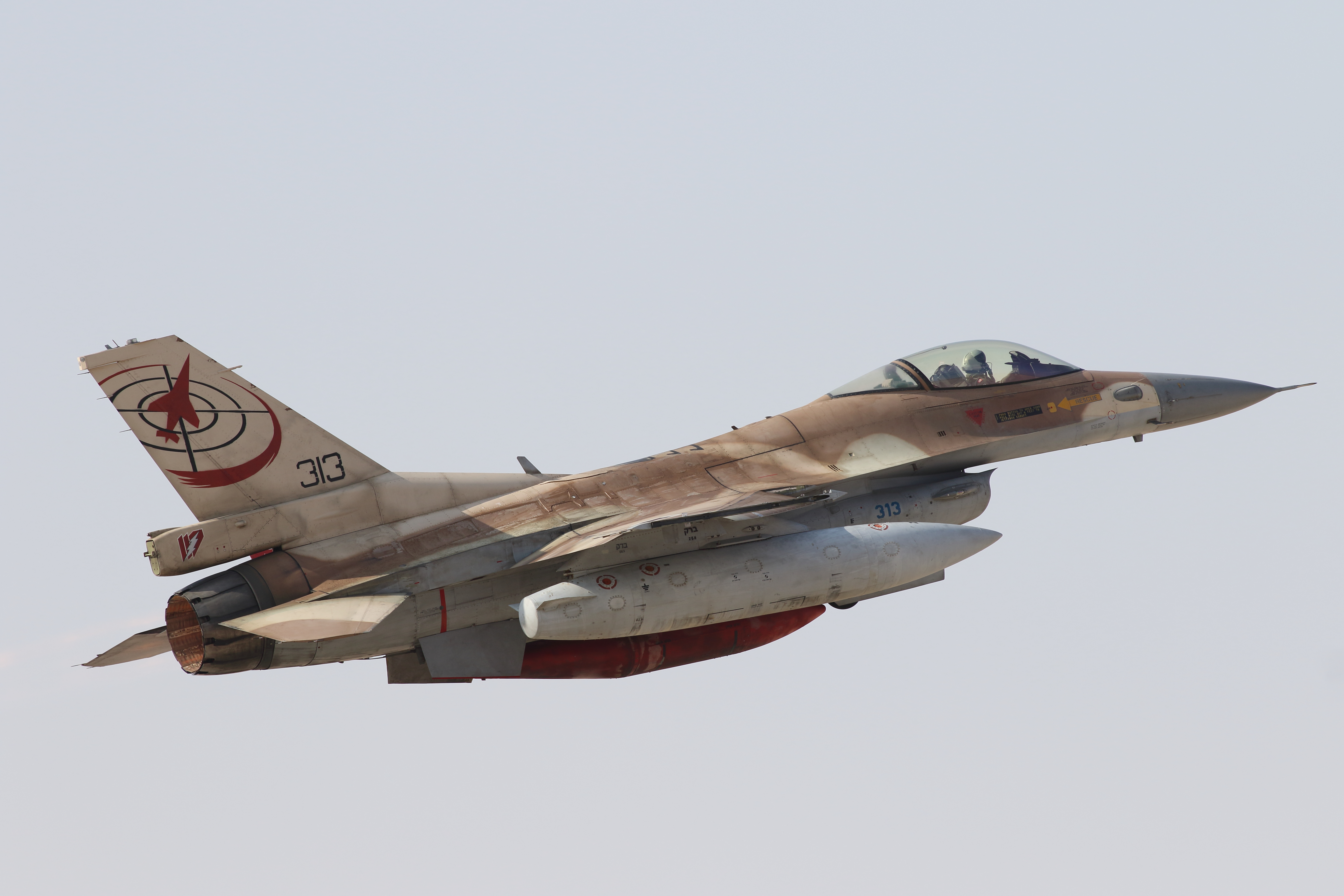 Apart from direct purposes (simulate real war flight scenarios and combining fourth and fifth generation aircraft fort he first time), Blue Flag 2019 also had two potential goals:
The first one was maintaining overwhelming air force superiority in the region. Israel has superior national defense and military forces in the Middle East. Its air force, which got famous after the Six Day war in 1967, made a special point of safeguarding its security through the inter-generational performance advantage of weapons. However, one of its F-16s was shot down by Syrian air defense troops in February 2018, and during its air raid of Syria, Russia delivered the S-300 air defense missile system to Syria, which somewhat undermined its superiority. Moreover, Israel believed in “attack is the best defense”. When its superiority over regional rivals is weakened, it’s necessary to upgrade its weapons and enhance their capability through realistic training.
The second was imposing pressure on Iran. Israel always takes Iran as the main threat in the region, which is in grave tension right now due to the escalation of the Iranian nuclear issue. After the US cut its input in the Middle East, Israel has felt a growing sense of insecurity from Iran. So its military has continuously increased the defense budget on the excuse of mounting threat from it. For instance, Israeli Prime Minister Netanyahu claimed “Iran is trying to besiege and threaten Israel”. Iran is rather backward in air defense network and electronic warfare, so F-35 warplanes can penetrate to its hinterland without flying over neither Saudi nor Iraqi military bases. 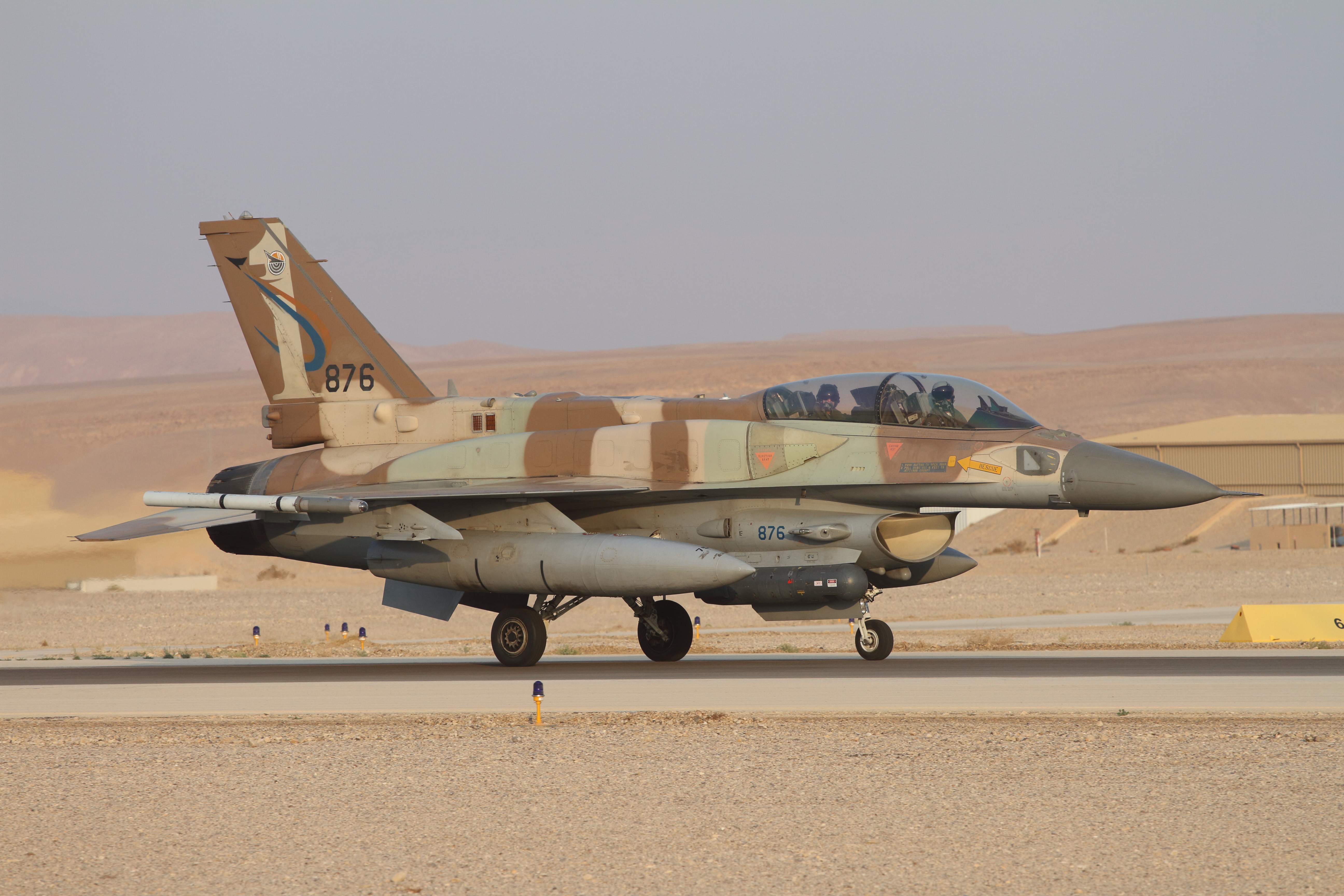 Mutual cooperation
Tal Herman said that the opportunity to gain mutual experience and cooperation is very important. One method some air forces have used to facilitate learning from each other is a squadron exchange. This exchange also builds personal ties and mutual respect for the abilities of each Blue Flag participant.
On the professional-technical level, the drill challenges the foreign aircrews by removing them from their comfort zone and getting them to fly in unfamiliar spaces. “They have to fly together with platforms they do not know, against tactics that are not their home court tactics. Some of us have to fly in a different language. Flying in English for an Israeli pilot is a different difficulty level, since we are used to communicate in Hebrew” said Herman.
Asked to list the advantages of an exercise like this, Herman said “the first is that it brings people from different air forces together. On the day that a real order might come, it makes it more comfortable to cooperate. We have been together, sitting in the same briefing rooms. We are not strangers. The multinational aspect of the training builds partnership and personal relationships among the pilots of each participating nation as they train together to make each pilot better”.
To facilitate and realise all this, an important aspect was the work on the ground. “We had to plan how we would bring all the international crews to Uvda and prepare infrastructure for two weeks’ time. The Blue Flag exercise represents not only the air force, but the entire State of Israel, so it is important for us that all international crews are welcomed properly, and that they see the IAF as the professional force that it is while also developing interpersonal relationships. When they go back home, we’ll have hundreds of good-will ambassadors”. 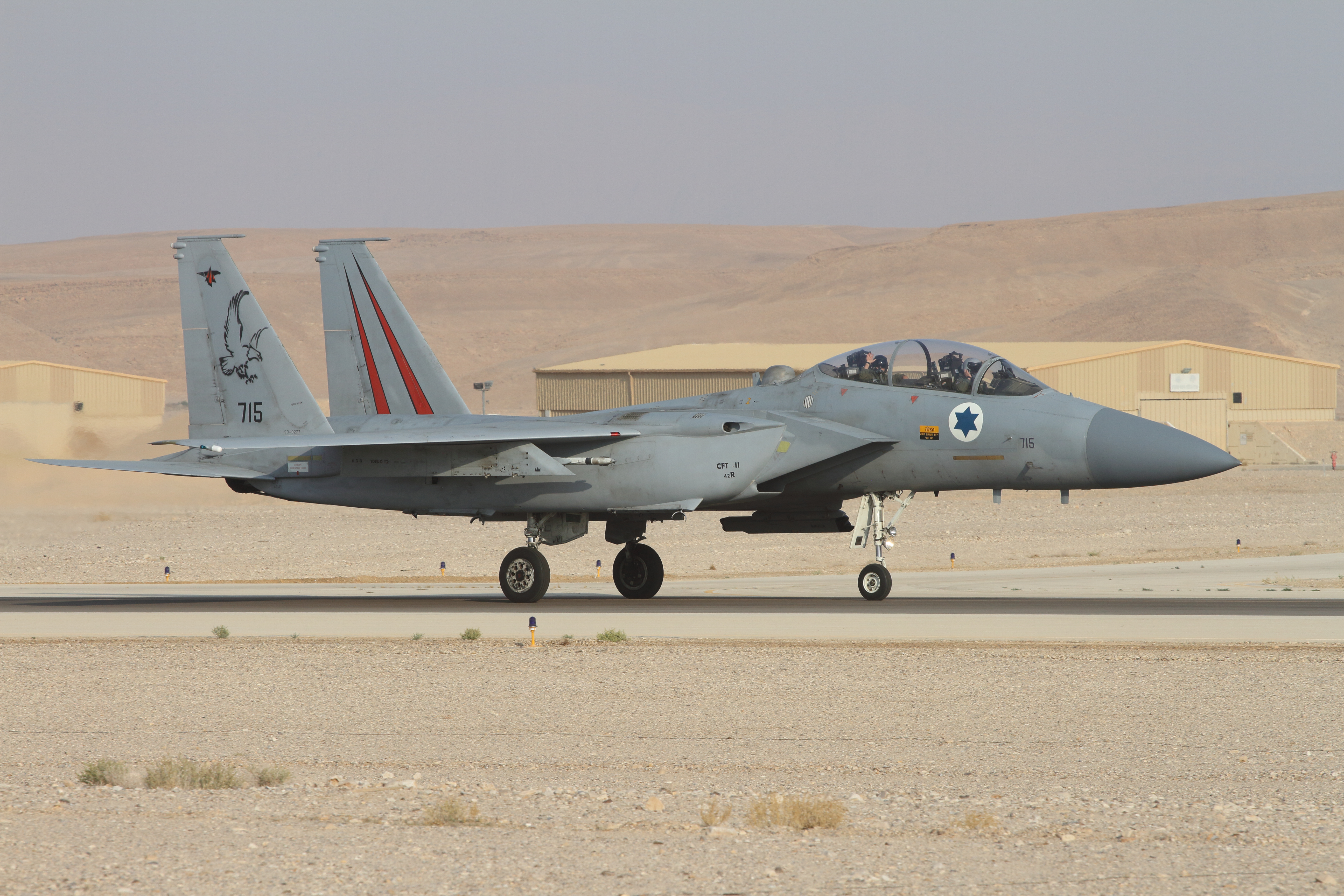 A big thank you to the IAF who made it possibe for us media and aircraft photographers to witness the afternoon mission on November 11th. Special thanks go to Mr. Tal Herman for his clear and enthousiastic presentation about the backgrounds and content of the Blue Flag 2019 exercise.