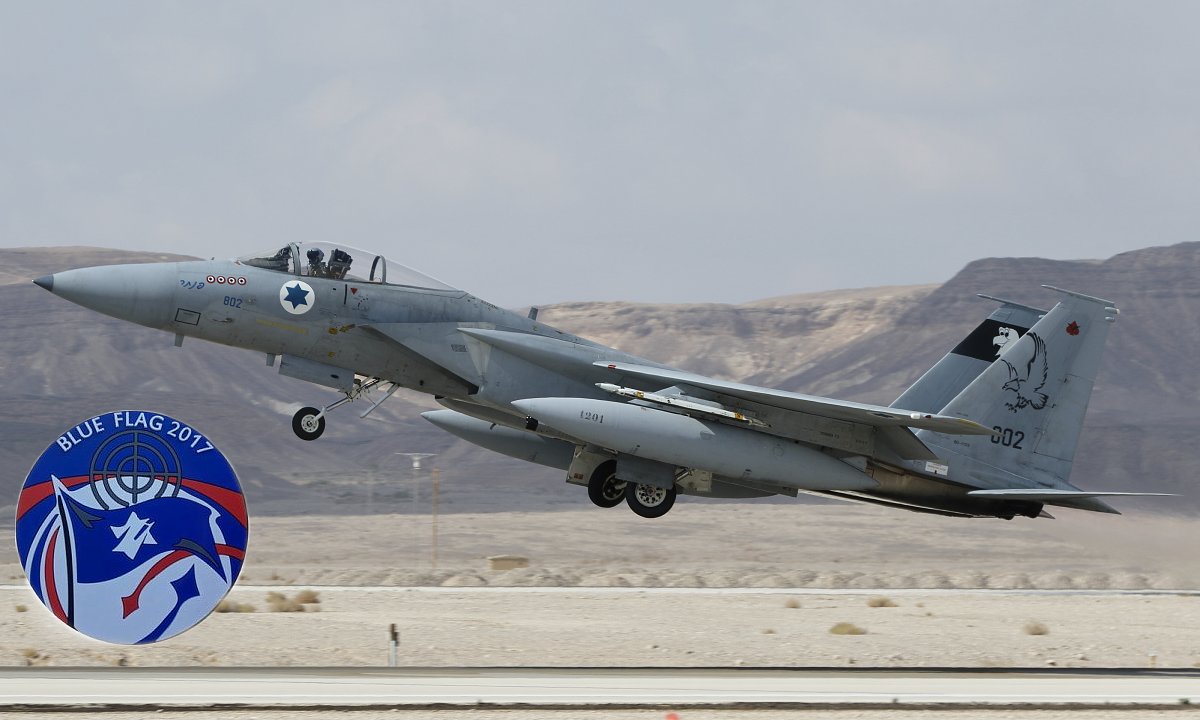 The skies above the Negev Desert in southern Israel have been especially active as of late, as the country hosted the largest ever iteration of its premier multi-national aerial exercise, nicknamed Blue Flag. Blue Flag 2017, which began on Nov. 6, 2017, is the third iteration of the biennial gathering and by far the largest in both size and scope, with more than 1,000 personnel in attendance. Seven countries – France, Germany, Greece, India, Italy, Poland and the United States – sent nearly three dozen aircraft to join their Israeli counterparts at Ovda Air Force Base. Located an hour’s drive north of Eilat and two-and-a-half hours south of Beersheba, the Ovda air base is about as remote as you can get in geographically tiny Israel. With few buildings in the barren landscape, pilots had the opportunity to fly low and fast over the “high-tech aerial playground” where the exercise was conducted. Ovda is the Israeli Air Force’s (IAF) only base dedicated mainly to training, rather than hosting operational squadrons, and is used to having air-crew and maintenance teams of other squadrons visiting.

The IAF embarked Blue Flag in 2013 for the first time and have subsequently hosted one every two years. The overall scope of the event however, has dramatically changed since the first Blue Flag in 2013. That exercise only had participants from Israel, Greece, Italy, and the United States. Blue Flag 2017 was the third in a row in which four more countries—France, Germany, India and Italy— sent their flying forces to the Promised Land. The IAF stressed the significance of having Luftwaffe fighter jets flying over Israeli skies for the first time. While Israel and Germany have trained together before, this was the first time in nearly 100 years, since World War I, that Luftwaffe fighter planes flew over Israel, then-Ottoman Palestine. Relations between the two countries have been steadily growing closer for decades, but always under the constant shadow of the Nazi regime and the Holocaust.

The Israelis have modeled the exercise on similar massive American aerial training drills, such as Red Flag and Green Flag, which helps explains their own chosen nickname. The pattern of the exercise, to a large degree, resembles that of the international Red Flag exercises, which are hosted by the United States Air Force at Nellis AFB, Nevada, several times each year. As in Red Flag, the various delegations are split into “red” and “blue” teams which then conduct simulated air battles between each other. A key component in the mock-aerial combat is the IAF’s Squadron 115, based at Ovda – the IAF’s “aggressor” unit, which simulates enemy aircraft and tactics using F-16C jets. Beyond flying “hostile” fighter jets, the unit’s personnel can also simulate other enemy forces, including surface-to-air threats, electronic warfare attacks, and challenges to friendly space-based assets. The squadron is almost certainly piloting the drones that are reportedly supporting “Nowhere Land” forces during Blue Flag 2017. 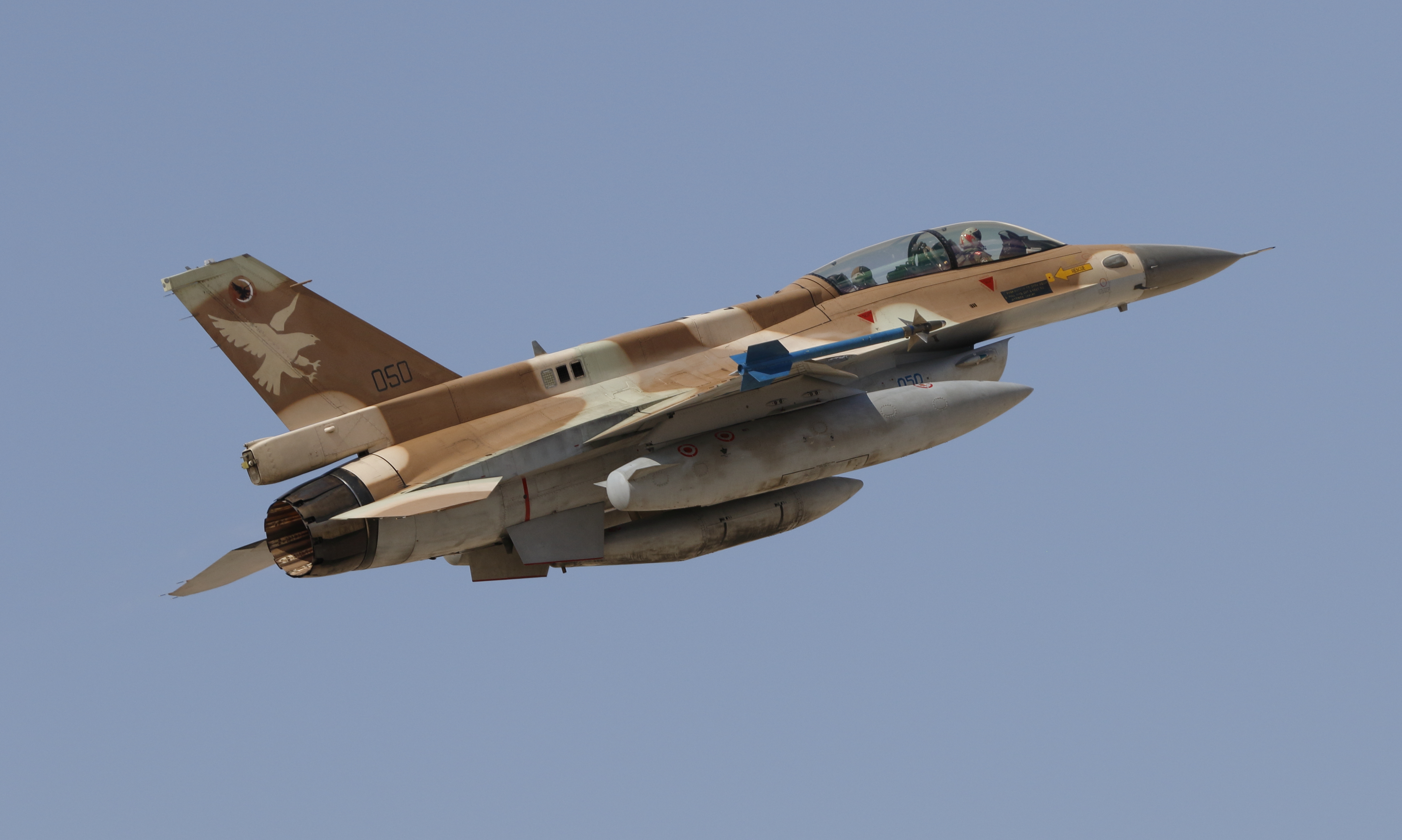 F-16D of 109 (‘Valley’) squadron which has its home base at Ramat David air base, climbing for a sortie during the press day, November 8th.

Blue Flag 2017 involves aerial operations based around the requirements of a fictional war between Falcon Land, the friendly side, and Nowhere Land, the enemy territory. IAF officials said the objective of Blue Flag 2017 was three-fold: strengthen diplomatic relations between the countries, expose the participating militaries to new tactics and techniques, and improve military cooperation by forcing the air forces to work together. During the exercise, air crews will encounter various combat scenarios, including offensive counter-air strikes, suppression and destruction of enemy air-defense systems. The event is showcasing the capabilities of the IAF, as well as those of its allies, at time when tensions in the region are running high, including, but not limited to, a unprecedented crackdown in Saudi Arabia, the ongoing crisis in Yemen, talk of a war between Saudis and Lebanon, widespread instability in Syria, and ongoing concerns about Iran’s ballistic missile programs.

The “Blue-Flag” training exercise simulated a continuous combat scenario, with 100 sorties flown each day, adding up to about 1,000 flights overall. Every day different targets were destroyed and, every action, success or failure affected the rest of the exercise. Throughout the exercise, the participants performed border protection, air-air battles and two-sided “Blue vs. Blue” sorties, in which the participating aircraft are divided into attackers and defenders and fight each other. 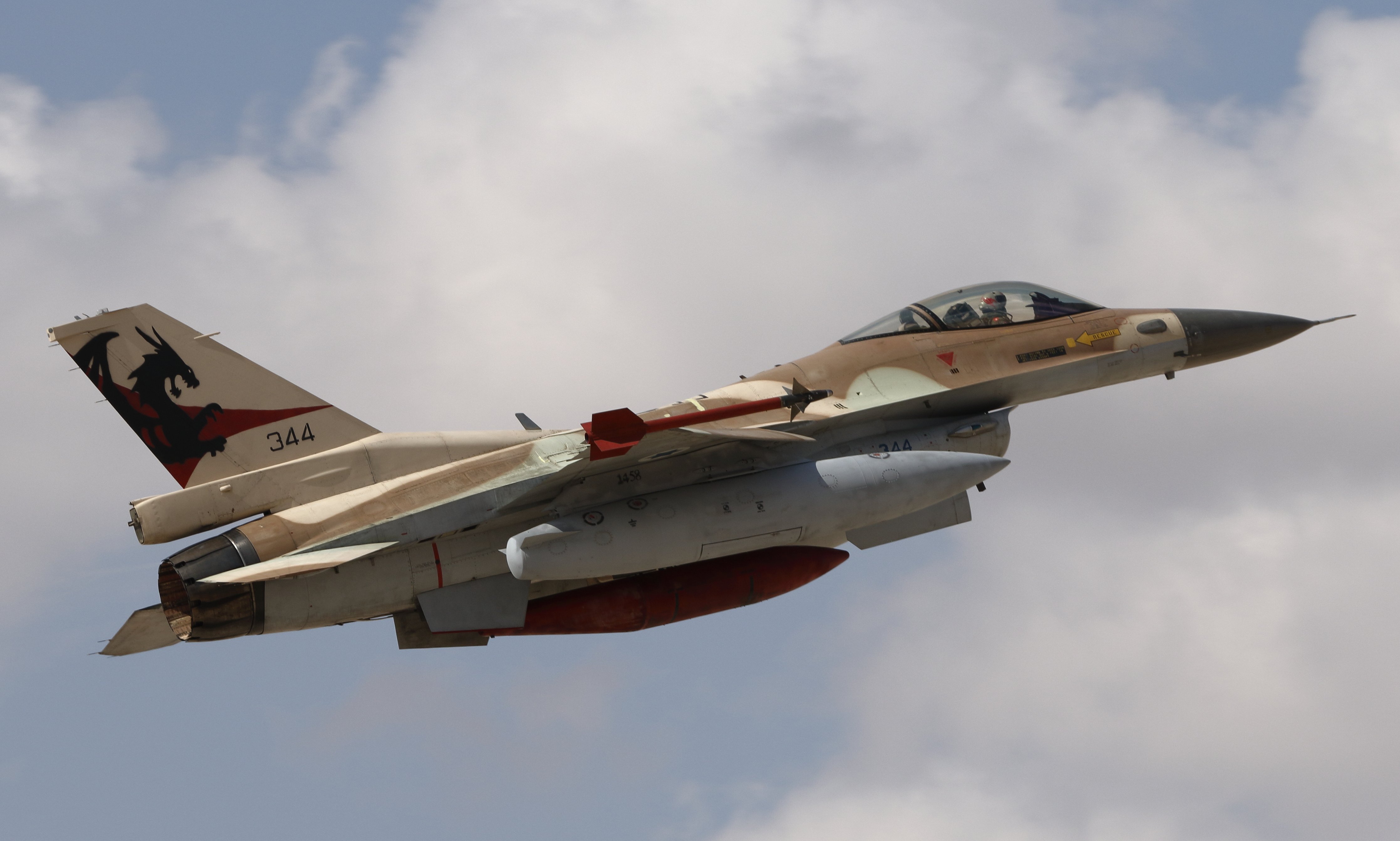 Additional F-16 fighter jets from the IAF’s elite 115 Squadron, also known as “Red Squadron” or “Dragon Squadron,” acted as the opposing red forces, to challenge the participants throughout the exercise. The unit  just traded in its F-16A/Bs for newer F-16C/Ds in April 2017.

Blue Flag remains beneficial for the participants as it gives them a chance to work and share lessons with various foreign forces, which often have their own ways of doing things, and over areas they are less familiar with. Major events like Blue Flag are also an opportunity for unit commanders and pilots alike to fly missions within a large, multi-national coalition, something that has become increasingly the norm for actual military operations, such as the fight against ISIS in Iraq and Syria. Moreover, Israel insists that Blue Flag is intended to improve ties between the country and its allies, promote exchanges between the participants, and help them train to operate together in the future, rather than as a signal to any particular country in the Middle East or elsewhere. It’s hard not to see it in that context, however, given the present state of affairs throughout the region. 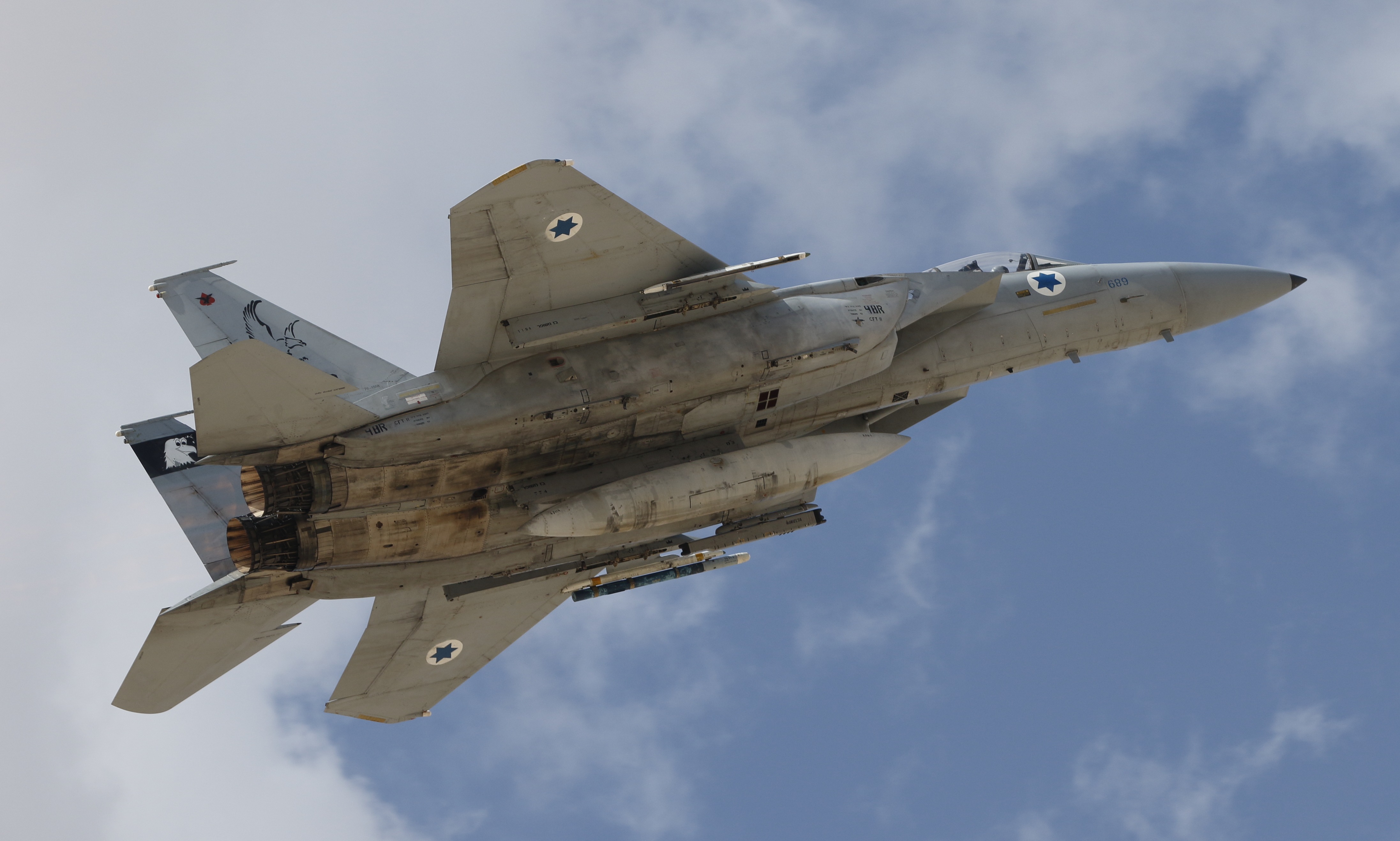 Blue Flag is not only a military exercise; it is a demonstration by Israel that more countries than ever are willing to engage with it publicly as strategic allies, and put aside political considerations, like the concerns of Arab nations and the Palestinian issue. As the influence of traditional diplomacy is waning, the role played by military commanders in international relations is growing. Which is also why the IAF was directed by the government to produce a major PR program alongside the training program, hosting media crews from Israel and abroad, and even more specialist aviation journalists and photographers, at Ovda on a lavish media day on Wednesday, November 8th. It was a demonstration of Israel’s both hard and soft power. Inviting the press to international war games is diplomacy by other means.

I also joined the media day. The IAF provided us with much information about the exercise. In a few briefings IAF members explained the background and objectives of Blue Flag 2017 and after a short base tour and another briefing by the commander of the Patriot battery, we were transported by bus to the runway, to see the take off and landings of participating aircraft.

It was a great day and therefore a great thank you to the IAF for being a great host during Blue Flag 2017! 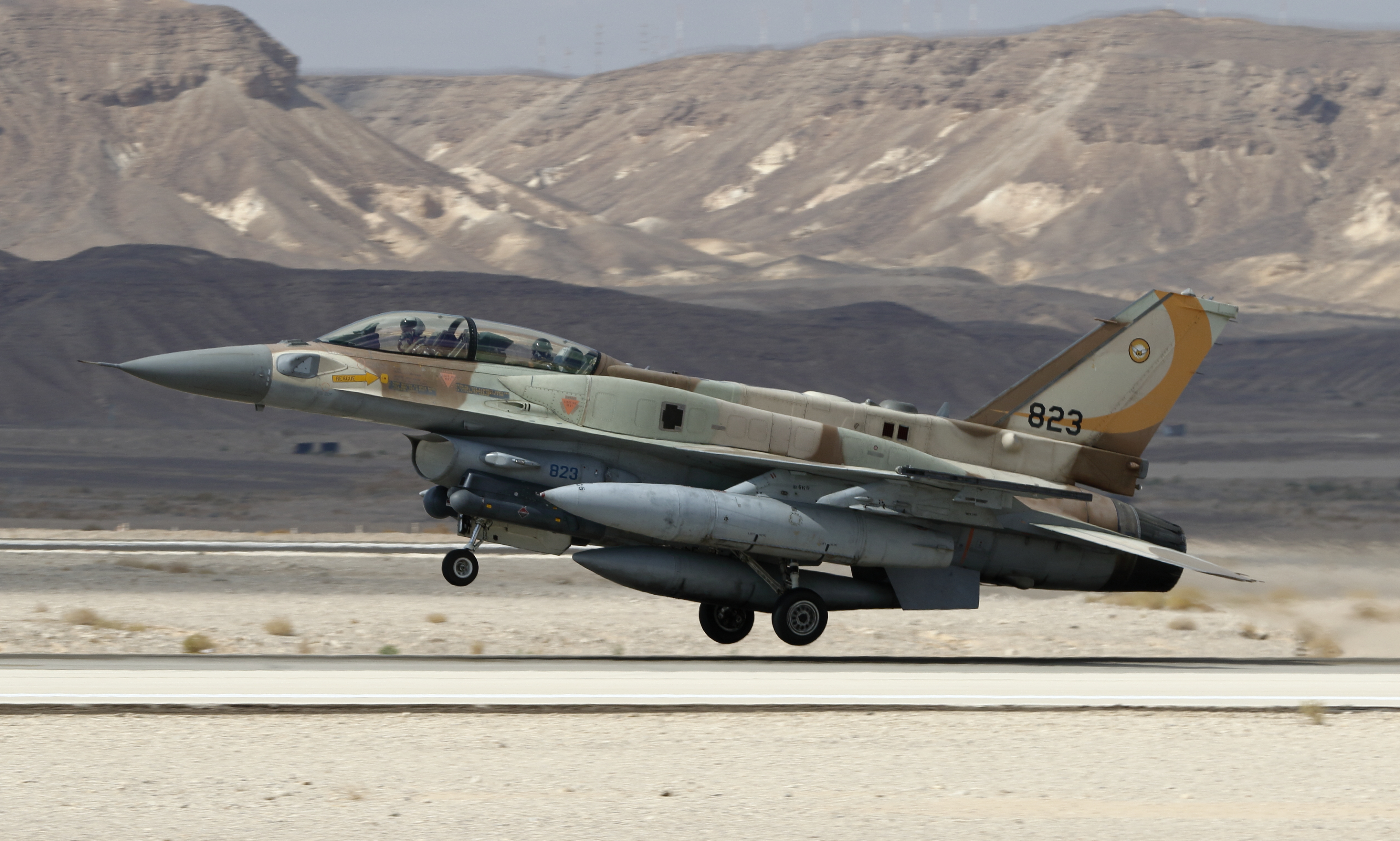 Six F-16I aircraft of the Knights of the orange tail (107) squadron from Hatzerim air base participated in Blue Flag 2017. 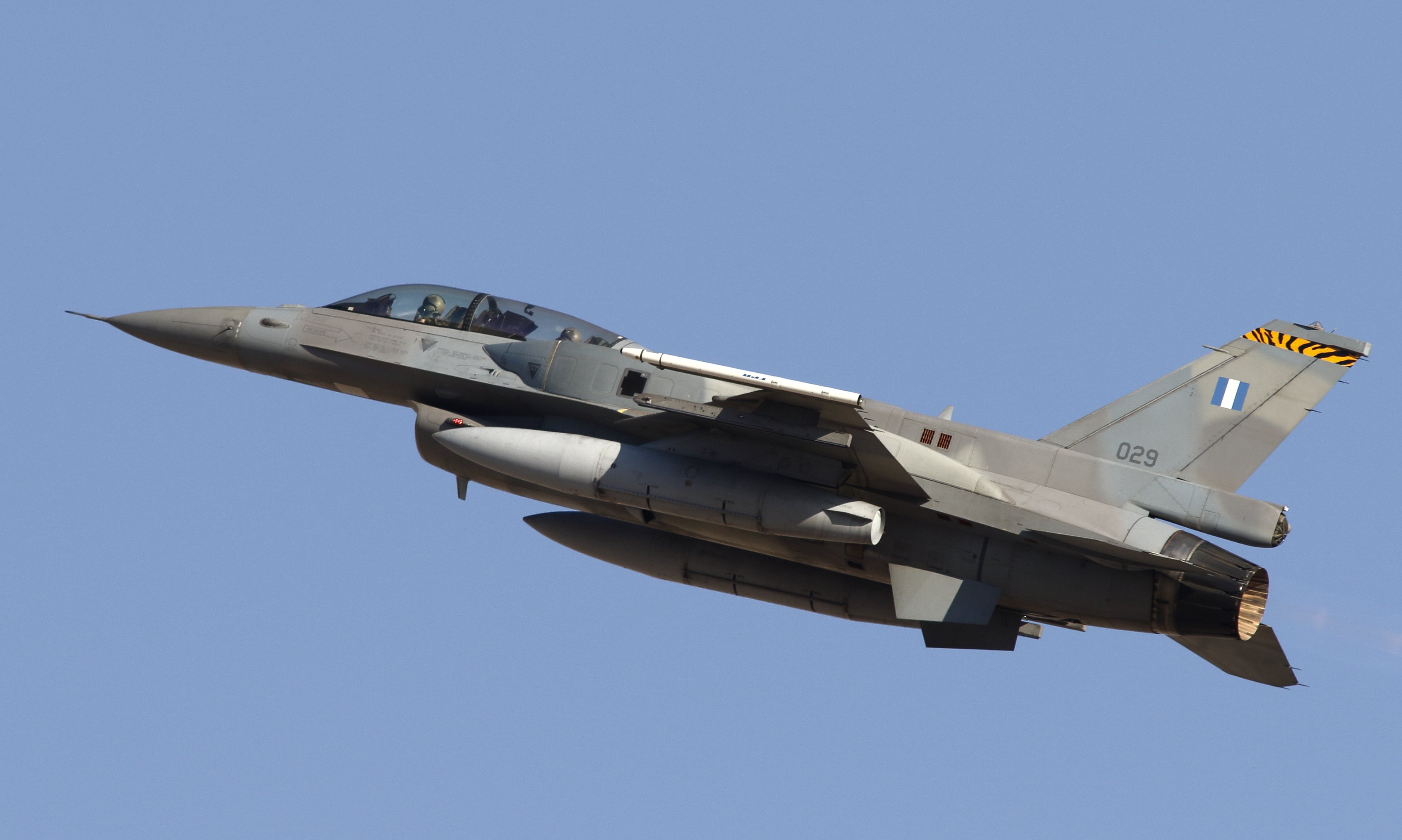